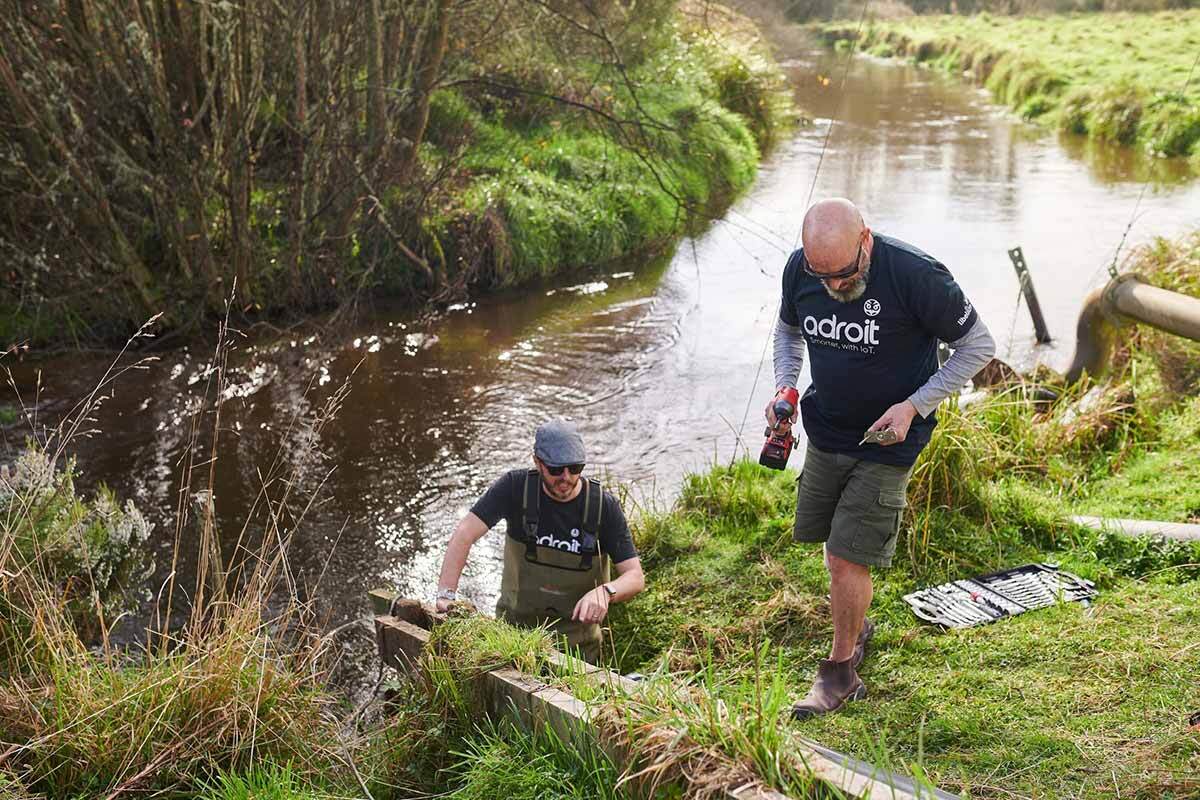 Adroit is delighted to be working with Mercury to facilitate real-time water quality monitoring at the Whirinaki catchment in South Waikato.

Mercury is partnering with the Whirinaki Community Group and Waikato Regional Council to install an Adroit real-time water monitoring solution in the South Waikato/ Rotorua District.

The health of waterways in rural environments has become an urgent issue in recent years. Concern over potential health effects of nitrates in rivers and aquifers, effects of urban and industrial pollution
and effects of climate change means that there is a need for a greater understanding of the current condition of our waterways and what is impacting it on a daily (or even, hourly) basis.

What differentiates this project from others Adroit has worked on, is that this installation is for the
public good, not any individual business – it has the potential to help transform environmental management decisions, by putting real-time information on water quality in front of all stakeholders including the local community, Iwi, businesses and the general public.

Data collected will be made available to the public and this will hopefully be the first in deployment of
sensors across waterways and aquifers in the district, enabling stakeholders to view key water parameters and better understand issues, potential causes and remediation. 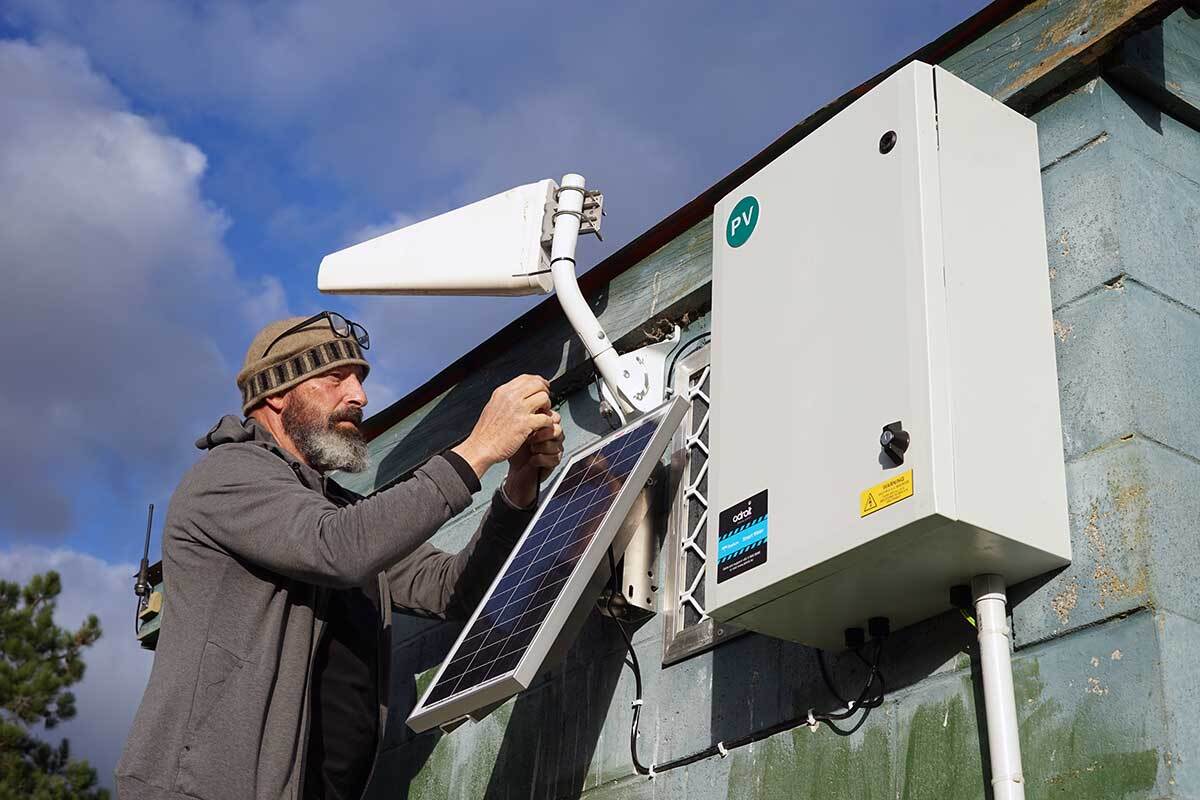 The brief was to measure and provide accurate and reliable continuous reporting of key water quality factors from the single, rural catchment site. The solution deployed is Adroit’s UV Nitrate and Multi-parameter Sonde monitoring kit, which is solar-powered and designed specifically for New Zealand streams, rivers and catchments.

This solution provides accurate and reliable real-time monitoring of:

Parameters can be added and removed based on client requirements.

Measurements are taken every hour and transmitted to the Adroit Platform via the Spark CatM1 network. Sensors were installed using Adroit’s custom-built deployment pipes and include self-cleaning sensor wipers which ensure consistent performance with minimal maintenance. 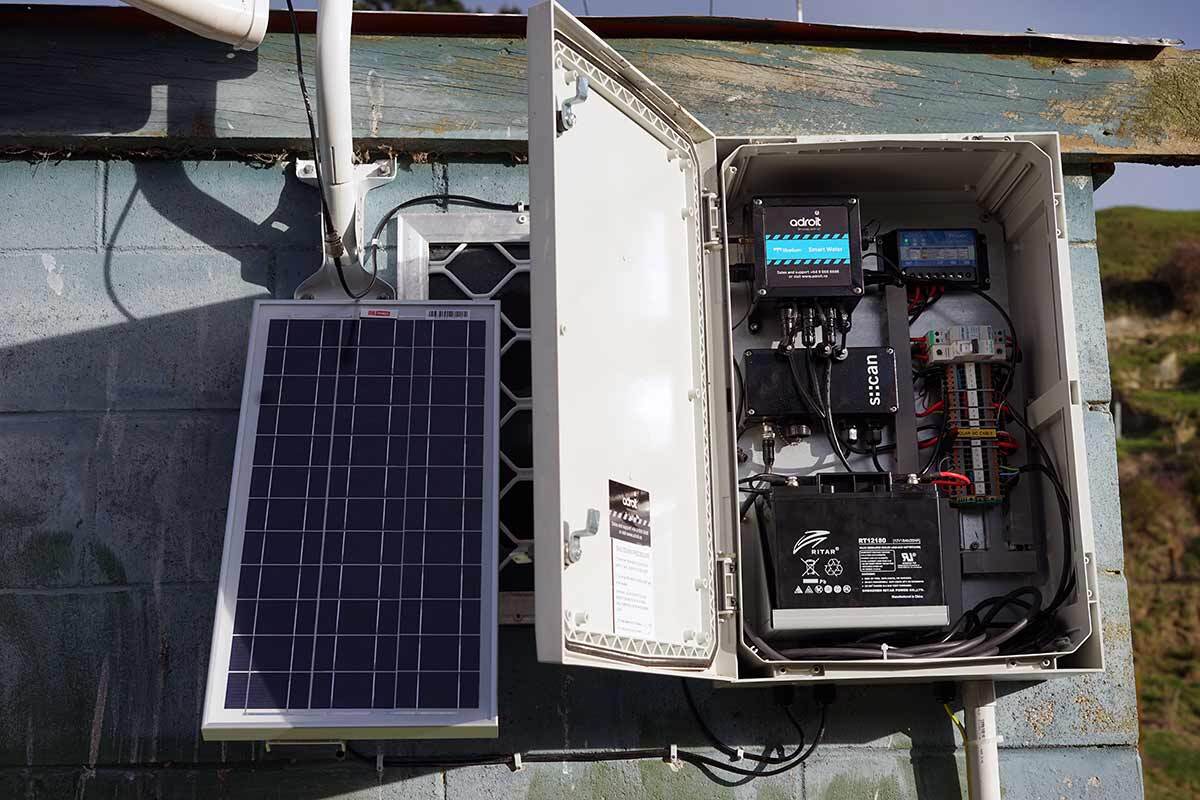 The Whirinaki site was selected because of interest from a local community catchment group that has been doing restoration work on farms, repairing streams and protecting habitats.

Mercury has undertaken consultation with local communities, including the Whirinaki Community Group, which was very keen on understanding whether the work they were doing was resulting in any benefit to water quality. The group was particularly interested in measuring suspended solids and turbidity because that is a key part of new farming legislation around planting to protect waterways.

Present standard practice is monthly grab samples that are manually collected on-site, delivered to a laboratory, then analysed, with results reported several days, or even weeks after sampling. Adroit’s role was to utilise a combination of the latest water sensors, IoT network and cloud technology to provide real-time accurate and reliable continuous monitoring of the required parameters. A particular challenge was the installation of the sensor and IoT equipment taking into account The instruments were mounted into a custom-designed deployment pipe mounted so that the instruments will be secure and covered by river water at all times (all seasons). The control box was mounted onto the side of a nearby pump house, which houses the Libelium logger, sensor controller, solar power control systems and battery. The solar panel was mounted on the roof of the building. A yagi external directional antenna was added to ensure a strong network connection due to the remote location. 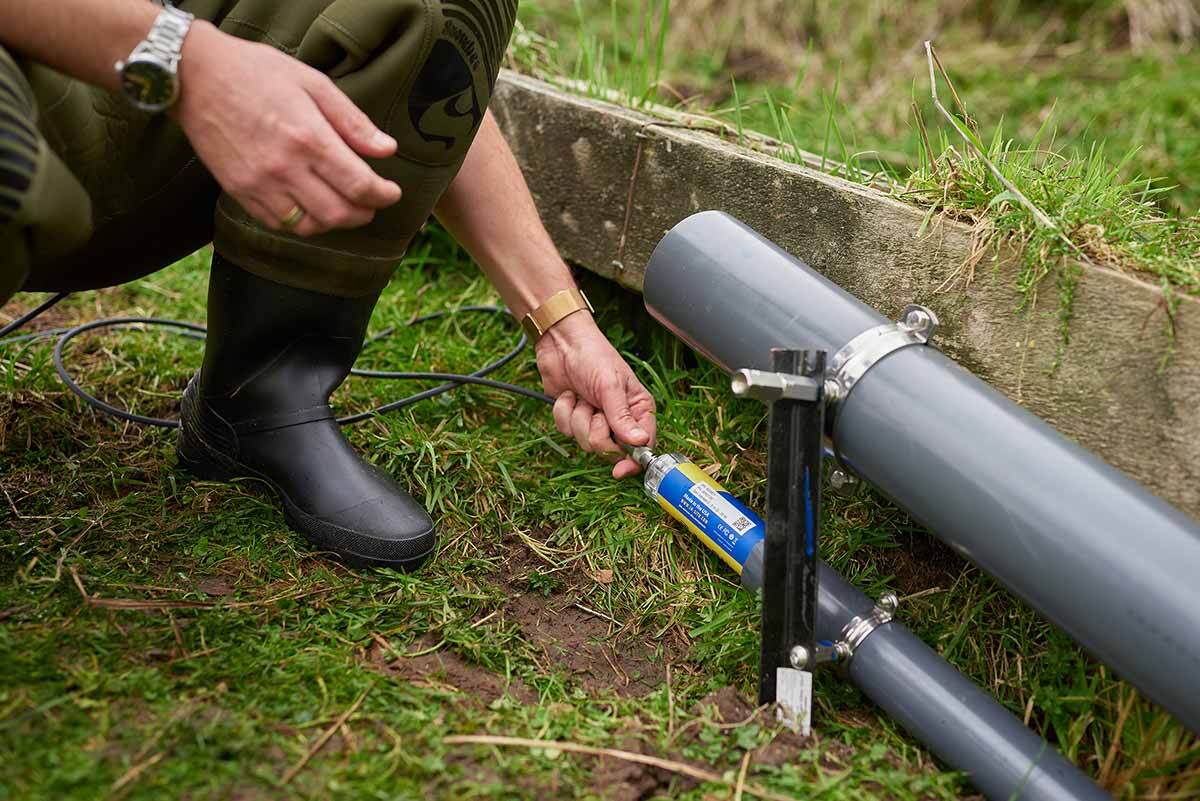 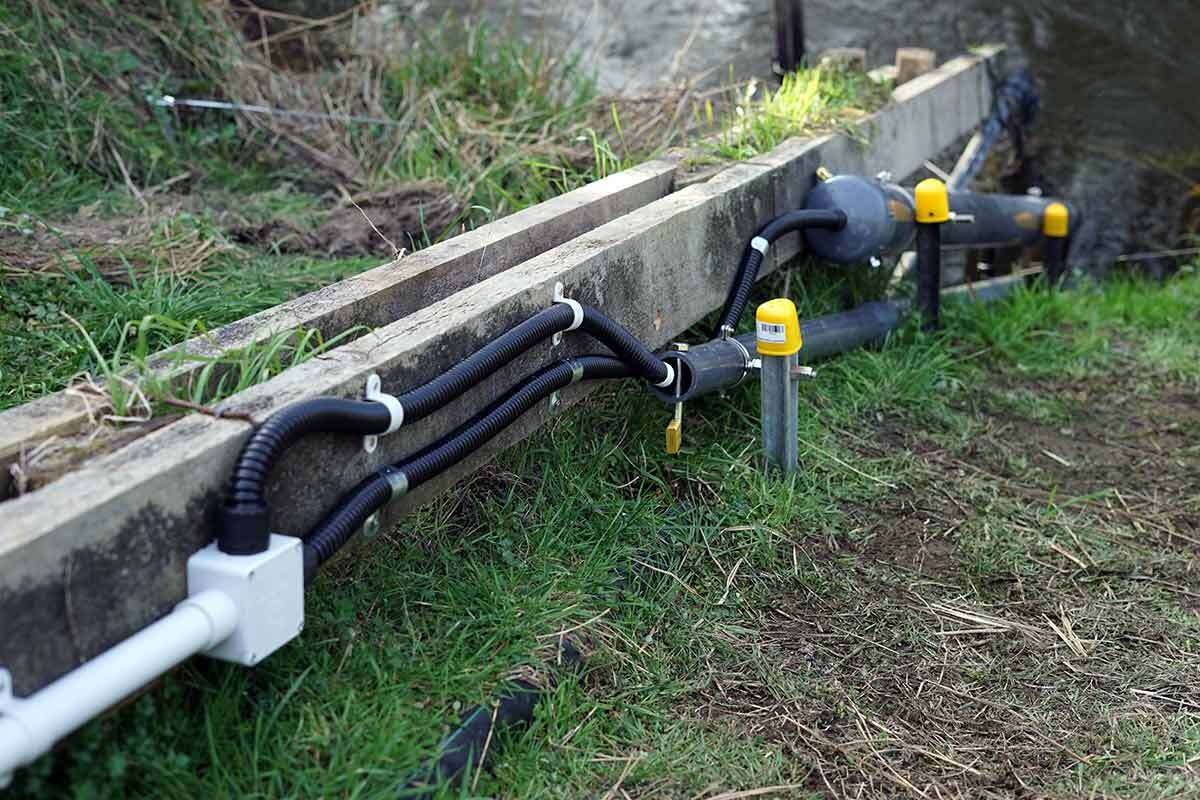 The installation was successfully completed mid-July, with sensor measurements, data transmission, and information available via the Adroit Platform the same day. A large number of stakeholders in the project have been provided with access to the platform and are already successfully viewing the data.

Gavin Williamson, Catchment Sustainability Manager for Mercury says that he’s really pleased with the installation and the results so far.

“It’s providing the real-time data – we haven’t done the final sensor calibration yet – that’s the next step – but the data is showing the picture, and there’s already a lot of interest in it.

“It’s really having the desired effect, which is to get people talking about it, seeing what it does today and whether it’s any different tomorrow. So yes, I’m really happy with the result.”

Williamson says that getting live data 24/7 has been particularly interesting and has already revealed some surprises.

“I wouldn’t have expected a largely spring-fed stream like this to change temperature-wise day and night, by two or three degrees. There’s a cold snap we’re going through at the moment and the river temperature is barely over 10 degrees, whereas a week or so ago it was 12.

“You can also definitely see a change in turbidity levels after rain, which again is exactly what we’re hoping for, because that then begs the question, ‘why?’.

“That’s where some real value’s going to come out of it, especially once we have a number of these installations throughout the whole catchment, then we can start to have a really intelligent conversation about what’s happening in the catchment.”

Williamson says that it’s important for the broader community to consider that the Waikato catchment goes all the way back up to the Alpine Plateau and north right down to the Tasman Sea.

“It’s really important for people to understand that catchment starts right up there and it goes all the way – not even just to the mouth of the river – but all the way to the taps in the houses on Auckland’s North Shore, given that a significant portion of Auckland’s drinking water is now coming out of the Waikato.”

Williamson says it is not a case of trying to find someone to blame for any adverse impact on waterways but working in the spirit of Kaitiakitanga to restore the river for the benefit of future generations.

“I’d make it really clear that from our perspective, this is absolutely not about pointing the finger anywhere. It’s about us as a community, having a conversation about how we continue to make things better. And so, we really want everyone engaged in it.

It’s about how we collectively lift the game in the whole catchment. This was part of an aspirational vision that Mercury has, which is for the Waikato to be the world’s best catchment. So, how do we all lean into that and make sure the things we’re doing are what’s best for the catchment, rather than necessarily what’s best from our perspective. 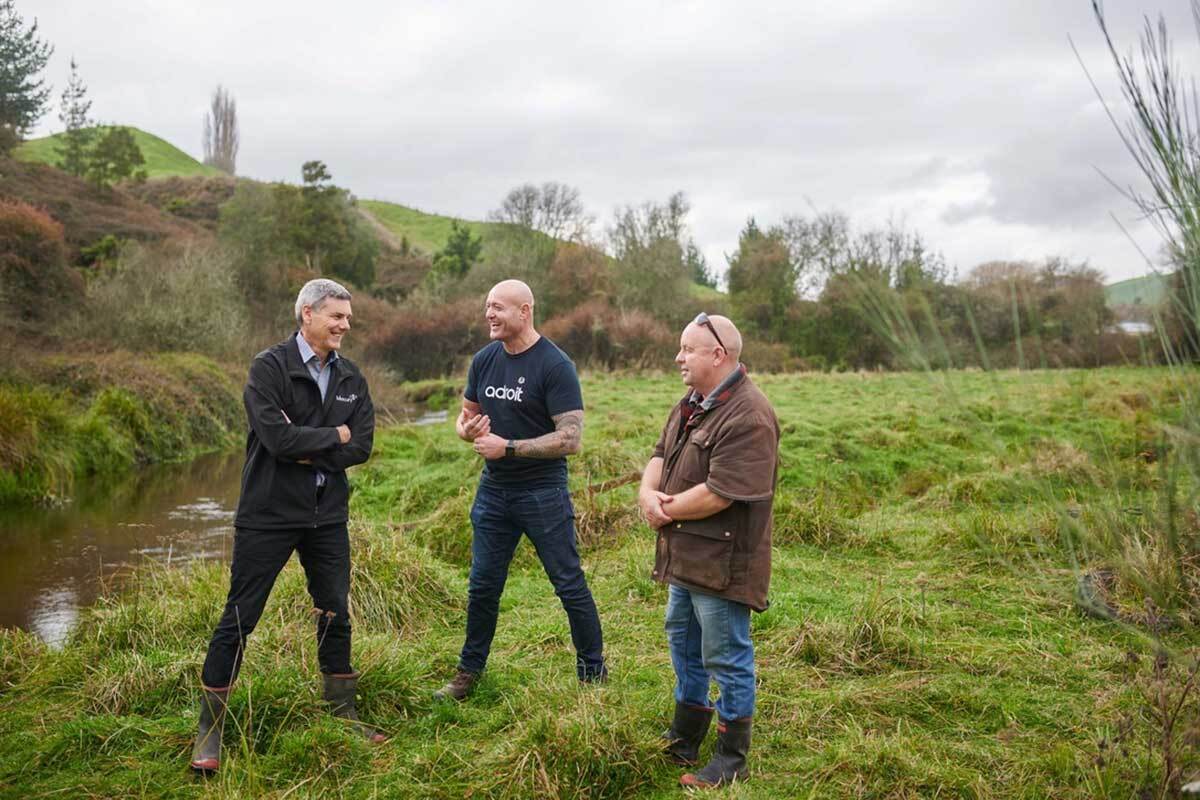 To learn more about Mercury and its work in the environment and clean water, see here.

Keep up to date with the exciting developments and current projects by joining the Adroit Newsletter. We have a zero spam policy!